A much needed gateaway

When life hits you hard and you are battling postoperative depression, which drains you both physically and mentally what else does your wanderlust soul needs to put you back in shape. This is exactly what I did. I hit the road to travel  to my fore-fathers homeland which, infact was obscure to me. To the land where fairies live, to the land which is considered a gateway to heaven, to Kashmir.

On July 17th, me along with my sister and a friend boarded the plane and reached Islamabad the same day. Having family in almost all parts of the country accommodation was not an issue. We had a short stay over in Pakistan Town 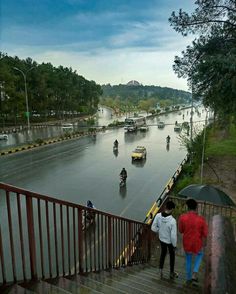 The city welcomed us with slight rain and cool breeze. Damp earth, clean roads, less pollution and serenity of the capital made us fall in love with it more than we had imagined. The following day we explored the city. This city sleeps early and is very quiet for my liking but it actually prepared us for our journey ahead.

On july 19th, we reached faizabad bus stop around noon. Booked our bus tickets, got on board around 2;00 pm. We were going to Muzaffarbabad, the capital city of Azad Kashmir. It was a very smooth ride. With every km passed we were leaving behind the polluted city life and entering the purity of nature. Mountains that were cut down to make roads, neelum river flowing alongside was giving our journey a scenic view. After 5 hours of this mesmerizing yet tiring journey we reached muzaffarabad and  landed at our relatives once again. Their house was on top of a steep mountain which was a challenge to climb. Evrery house in the neighbourhood was small, had a lot of pets and almost each of them had their own kitchen garden. The view from their terrace however stole the show. It was completely dark with the blingy mountains on all four sides and flickering stars dazzling from above. We enjoyed the view with home-grown walnuts and fruits and fresh lemonade. For dinner we were served kushtabay, a kashmiri dish which was more like our white koftay and mutton curry. We finally ended the day by planning about our next day trip to neelum valley.  By this time we were all in aww of the hospitality and candidness of the locals. We were definitely amongsnt the most beautiful people in their beautiful land.

Our next day started early, we had to catch the bus at 6 am. Packed two dresses, an overcoat, some edibles and set off to explore the ‘ paradise of azad Kashmir; the very beautiful neelum valley. Our final destination was barkati lake which was the main tourist spot but before that we planned to do a stop over in deewaryan.

It was 5 hours away from muzaffarabd and 19kms  away from barkati lake. Dowaryan is the nearest village settlement to the barkati lake which serves as basecamps and has resthouses for the travelers. We came across a meadow  that looked as if it had stepped from the pages of a storybook. We immediately stopped at one of those rest houses to stay the night. We decided to sit along the bank of the river until the sun sets. Sky above the meadow was a feast for the eyes. It stretched as far as the eye could see in a dome of cocktail-blue, punched with fluffy cloud.Sky punching mountains soar in the background. Beautiful wooden cottages which were surrounded by amazon-green cash crops. The gentle song of the river neelum, the humming of the birds as if they were singing us  welcome songs, were so soothing to the ears..I had succumbed myself to nature in that very moment. I kept realizing how vast is the nature and how tiny are us, the human beings. I felt more close to myself than I had ever been. And I was beginning  to find the tranquility which I had yearned for before I stepped out of the comfort zone of my house. We sat there as dusk took over the sky and the darkness slowly crept in and it was beginning to get unsafe according to the locals. We spent the night chanting with the locals, trying to fine more about the  barkati lake and just enjoying ourselves. Ratti gali  (barkati) lake belongs to the  especial category of lakes which are called alpine glaciel lakes. 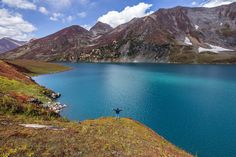 This means that the lake has been formed by the water which flows out of a melting lake and is only visible during some parts of the year and maybe covered by ice for upto two or three months each year. The journey to the ratti gali lake was nothing but a 3 hours of a roller coaster ride through the rocky mountains and snow covered hiking trials. It was beginning to get cold now. Even though the mountains surrounding  the lake go quite high, the altitude of the lake itself is 12,130 ft. At the end of the hiking trial, we saw the something which cannot be described in words, whose beauty cannot be penned down in words, it made us speechless. The wide vista of the snow covered mountains, the base of ehich surrounds the oh so scenic, snow capped barkati lake. The water was freezing cold. The valley  followed the ridge down toward a patch of grass which extended far and beyond covered with blossom flowers of almost every color. In a span of few hours, we witnessed all four seasons. It was so cold that we thought we’d probably get a frostbite then suddenly sun shines from far warming us up. It was a scene to witness. The warmth of the nature tangled us in a way that we forgot almost everything . it was now time that we must hurry along our basecamp now as the scavenging skies were pressing down on top of us .but we were comforted by the fact that this  Heaven’s Hideaway will burn long into our  memory banks forever. 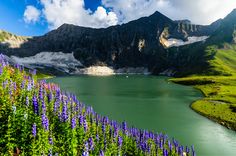 The remaning of our trip comprised of our visits to bagh, malot, and some areas of west Kashmir. Our expeditions were more about exploring the local culture, taking long walks in the forest, eating local food, making friends and memories that shall last forever but wherever we would  go we left our heart in neelum.

After 15 days of our stay in Kashmir  we were now ready to come back and start afresh.